Wednesday, April 21, 2004
16 days old
They are still alive and looking perky. Today I got worried about them, because they have only been taking 2.5 to 4cc per feeding (morning and evening) and suddenly Kevin gets one of them to eat *8*cc’s this morning!! I felt really alarmed, because the things I read said it’s really important to not feed them too much or they can bloat. They are already pacing back and forth in the cage, wanting to eat but I’m going to feed them a little later so it will be about 12 hours between feedings.

It’s confusing, because one thing I printed out said at 2-3 weeks of age they should be eating I think it said 7cc to 14cc per feeding, then it said “cottontails will eat so much less” whatever they meant by that. But they could barely get down 4cc and that was forcing the last 1.5cc into them. Then… I read something else on the ‘net that said cottontails should have 1cc per inch of body. And then suddenly one eats EIGHT cc’s and I thought, oh gosh, here we go — that one’s going to be sick. But they both look fine tonight.

From today on, the bunnies have pretty much been setting their own amounts of milk. We are no longer having to hold their heads and force them to eat. They eat from 3cc’s to 5cc’s and stop on their own accord. We are feeding them three times a day, approximately 6 hours apart. For example, 6:30am, 12:30pm and 6:30pm.

Monday, April 19th, 2004
14 days old
I’m trying not to get too excited, but Squinty Eyes was out and waiting to be fed at tonight’s feeding! This is a good sign that he is feeling better! I am also beginning to realize that he keeps his little eyes squinty and this makes it look like he doesn’t feel too good. Cutie Pie has been bright-eyed and bushy-tailed all along. What a cutie! 🙂 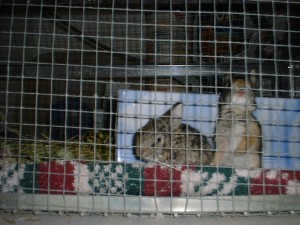 There are 22 days of reports about the bunnies. You are on Day 9, we skipped a day, click here to read Day 11.

Sunday, April 18, 2004
13 days old
Tiny had passed away this morning when I went to feed the bunnies. Another of the bunnies, Squinty Eyes acts like he isn’t feeling well. I am very distraught, I feel like I’m *killing* them, instead of keeping them alive! I called a phone number for a bunny rehabber from a website. It says to be ready with pen and paper, to take numbers of rehabbers. All along I’ve kept that warning in the back of my mind that in order for a baby bunny to survive, you must take them to a rehabber. But I’ve raised baby kittens that were only a few days old, and I felt confident in my ability to raise these bunnies, so didn’t want to pass them on to someone else, when I knewI could raise them. But I thought maybe I had better get someone else to care for them, maybe there is something else I’m not doing, some secret I don’t know about! So I called the number, and it said press 2 for bunnies, but when I pushed 2 it only took me to a recording that said there were no messages at this time, please check back again. Well, then I didn’t know how else to get hold of anyone, so I decided I would continue to do my best with the bunnies.

Squinty Eyes was acting lethargic, walking like he was drunk and had brown urine again. I was very concerned about him. The other bun, Cutie Pie was gobbling down his milk and getting around just fine. Cutie Pie is peeing on his own all the time.

In retrospect, one thing I did for Squinty Eyes that I don’t know if this had any effect on his getting better or not is that I lowered his bottom half into a cup of warm water, and soaked him for just a few seconds. Up to this point his belly hair was not fluffy and soft, but was peeing on himself and the brown urine was dried onto him. I stopped helping Cutie to pee a couple days ago, but had still been helping Squinty to pee (his bottom also was beginning to look chapped and sore!). Maybe the urine was concentrated on his belly and he was trying to clean himself and ingesting it, but cleaning him off helped?

There are 22 days of reports on the bunnies. You are on Day 8, click here to read Day 9.

Saturday, April 17, 2004
12 days old
Tiny is still alive this morning. I got 4cc’s down the other two bunnies at breakfast, 2cc’s at lunch and 4cc’s in the evening. I’m still barely able to get 2cc’s each time into Tiny. The other buns are doing very well in comparison.

It’s hard to know how much to feed them, since we are still basically having to forcefeed them. One article said a rule of thumb is 1cc per feeding, per inch of cottontail. Another article gave estimated amounts by age, but the amounts were not specifically for cottontails (which are far smaller as adults than jackrabbits or domesticated rabbits). They will only let us “forcefeed” them so many cc’s, and then they absolutely refuse to suck/lick down another drop.

We are keeping them in a cage on top of the freezer. The top of the freezer is warm. It is an upright freezer, about six feet tall and this keeps our cats away from the bunnies also. We don’t want them to become used to the cats and think they are safe creatures, because we do plan to rehabilitate these bunnies back into their natural habitat.

There are 22 days of reports on the bunnies. You are on Day 7, click here to read Day 8.

Friday, April 16th
11 days old
Tiny is not doing well. He is walking like he is drunk, and he now has the dark urine. It seems to me that he isn’t able to keep his body temperature up, so I carried him in my sports bra for most of the day. He seems to do better after I warm him up. He walks normally, and seems perky. But, I am really having to force the milk into him. I am worried that I am only prolonging his life. His little bottom is raw looking, unfortunately probably due to my wiping him trying to help him urinate. His little belly is dark with urine and wet sometimes. I think he is peeing on his own a bit, but not enough. I am putting vitamin E on his bottom to help it feel better. Tiny has always been the smallest, and he’s really scrawny. But he is still cleaning himself, and kicking and fighting me when I wipe his bottom. I was crying last night because he just doesn’t seem to be doing well.

Even though all their eyes are open, I’m still helping them pee just in case they aren’t going on their own. Actually, Cutie Pie peed all on his own today. I always put a t-shirt on my lap when I feed them, and he squatted right down and peed.

There are 22 days of reports on the bunnies. You are on Day 6, click here to read Day 7.

Thursday, April 15th
10 days old
My son fed the bunnies more often today, and the one with the dark urine has clear urine tonight. My theory was correct, more fluids will clear up the brown urine.

There are 22 days of reports about the bunnies. You are on Day 5, click here to read Day 6.